COVID Funds to Cities and Counties

This week at the legislature, we will be addressing the $2.1 Billion in federal CARE funds (for COVID-19) approriated from Congress to Minnesota. If the legislature does not appropriate its use, the Governor will be given sole discretion on how to spend it. The Senate has passed and the House is attempting to take up a bill appropriating ~$840 million to local towns and counties. The US Congress appropriated money directly to Hennepin and Ramsey Counties and they have already been paid.

While this is still taxpayer funds, I believe it is best put to use by local governments.

Here are the numbers for towns in the district. Unlike normal LGA funds, which are granted based on age of infrastructure, unemployment rates, tax base, etc, this is straight-up $75.34 per resident. This is proposed funding and has not yet passed the legislature or been signed into law.

I have also uploaded draft documents for the rest of the towns (>200 residents), cities, and counties of Minnesota.  For towns less than 200 residents, the legislation states they can request funds directly from their counties.

Lawsuit Against the Governor's Power Grab

Minnesota State Representatives Steve Drazkowski, Cal Bahr, Tim Miller, and Jeremy Munson have filed a lawsuit to challenge Governor Walz's authority to declare a peacetime emergency and unilaterally write laws.
The Governor usurped the authority of the Minnesota Legislature and the checks and balances provided by the Minnesota Constitution for our three branches of government when he unilaterally declared a peacetime emergency and issued himself the power to write laws with enforcement powers.

On May 28, I, along with Representatives Drazkowski, Bahr, Miller, the Free Minnesota Small Business Coalition, and a number of Minnesota businesses, filed a lawsuit to challenge Governor Walz's authority to declare a peacetime emergency and unilaterally write laws. Minnesota has three branches of government to prevent the consolidation of power. Using MN Stat. Sec. 12.31, the Governor usurped the legislative process and the checks and balances provided by our three branches, when he unilaterally declared a peacetime emergency and provided himself the power to write laws. He did this assured that with a split legislature his powers would never be taken or limited.

Unlike the specific instances cited in the statute, a public health crisis extends for indefinitely, and the executive orders associated are not limited in scope. This is why, about a week prior to Governor Walz declaring a peacetime emergency, a bill was introduced in the MN House to add specific language to this statute that would allow peacetime emergencies to be declared for a "public health crisis". This bill died in the House Ways and Means Committee and did not have a Senate companion, yet the Governor declared an emergency anyways and unilaterally expanded his powers. Without declaring a peacetime emergency, he would not have the authority to dictate stay at home orders, or Minnesota businesses and churches close.

If successful, we will end the Governor's peacetime emergency and his executive orders.  The power to write laws and address this public health problem will remain with the legislature. Most importantly, our success will mean there is no consolidation of power and no Governor will be able to unilaterally write laws for a virus which will be with us for years.

People across Minnesota are asking how they can help end the Governor's unilateral powers. We set up a GoFundMe page to raise money for legal fees and expenses. Any money not used for this lawsuit will be placed in a fund to help small businesses with legal fees. None of the money will be used for political campaigns and contributions are not tax deductible.

All businesses should be allowed to open without double standards. Governor Walz should not be allowed to expand his executive powers, bypass the legislature, and continue the peacetime emergency indefinitely. This authoritarian chapter in MN history should never be allowed again.

As we head into session, let's revisit the most impactful legislation to actually reduce the cost of healthcare, and with it, health insurance premiums in Minnesota: House File 638, "The Patient Right to Shop Act"

Watch the 2 minute explainer video on why this needs to pass for #HealthFreedom. 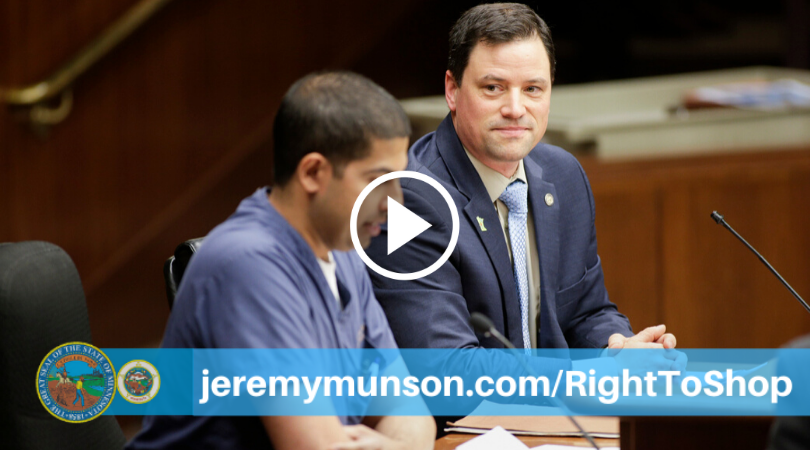